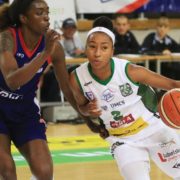 Feyonda Fitzgerald: I want to be a Polish League MVP